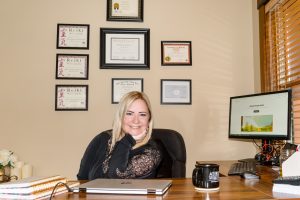 Gabrielle fell in love with the Adirondacks during her studies of English and Business at Plattsburgh State University. Originally from Long Island, Gabrielle pursued her Master’s Degree in English at Queens College, and entered corporate America where she quickly developed a name for herself inside the staffing industry.

In 2020, Gabrielle returned to the Adirondacks, in the hamlet of Jay, with her husband Sean. Together, they formed Adirondack Mountain Retreats, and are sharing their love for life and the North Country through their vacation rentals, retreats, events, adventures, and inspiration. Gabrielle’s overall mission is to inspire others to take control of their minds and become their best selves in all aspects of their lives, health, and careers. Gabrielle is a certified Reiki Master, NYS licensed Cosmetologist, and Spin Instructor. She is also a certified holistic life coach and has studied self-help with some of the top gurus in the world. Gabrielle also serves as the board President of the Au Sable River Valley Business Association, and teaches at Plattsburgh State University.

When she isn’t working, you can easily find Gabrielle outdoors gardening, hiking, biking, reading, or on an adventure with their goldens, Maggie and Mel. 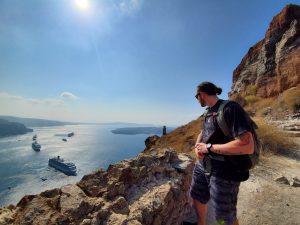 Originally from Flagtown, New Jersey, Sean started riding ATV’s at the age of 4 and later began racing professionally at the young age of 15. After having a successful career racing and traveling for nearly 10 years, Sean then went on to work as a technician for CBS Sports, Fox, NBC and Golf Channel. After nearly 10 years working in television, Sean walked away with 2 Emmys. One for Super Bowl 50 as an Audio Technician and another for Outstanding Technical Team Remote at the 2019 Masters golf Championship held in Augusta, GA.  When Sean wasn’t traveling for work, he helped his dad run their tree service business, Neidlingers Tree Service. 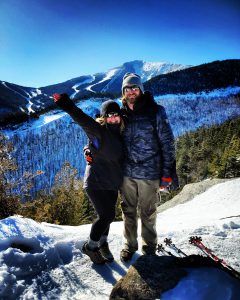 When they first began dating, Gabrielle introduced Sean to one of her most sacred places on earth. Sean fell in love with the Adirondacks instantly. He knew immediately that if they were lucky enough to live in a place where other people vacation, that they had a duty to share its magic with other people.  We have traveled all over the world from our previous jobs and for us, Jay, NY, was where we wanted to settle down, Sean says. Today, as co-owner of Adirondack Mountain Retreats and as the Director of Operations, Sean strives to offer the best retreats and short term rentals in the Adirondacks. When he’s not working on hosting your home or on an adventure with Gabrielle and the pups, you can find Sean mountain biking, golfing, kayaking, fishing, and most of all, on the slopes snowboarding.

Copyright © 2023 All Rights Reserved. Adirondack Mountain Retreats, LLC.
By Smart Site Designs
We use cookies on our website to give you the most relevant experience by remembering your preferences and repeat visits. By clicking “Accept”, you consent to the use of ALL the cookies.
Do not sell my personal information.
Cookie SettingsAccept
Manage consent

This website uses cookies to improve your experience while you navigate through the website. Out of these, the cookies that are categorized as necessary are stored on your browser as they are essential for the working of basic functionalities of the website. We also use third-party cookies that help us analyze and understand how you use this website. These cookies will be stored in your browser only with your consent. You also have the option to opt-out of these cookies. But opting out of some of these cookies may affect your browsing experience.
Necessary Always Enabled
Necessary cookies are absolutely essential for the website to function properly. These cookies ensure basic functionalities and security features of the website, anonymously.
Functional
Functional cookies help to perform certain functionalities like sharing the content of the website on social media platforms, collect feedbacks, and other third-party features.
Performance
Performance cookies are used to understand and analyze the key performance indexes of the website which helps in delivering a better user experience for the visitors.
Analytics
Analytical cookies are used to understand how visitors interact with the website. These cookies help provide information on metrics the number of visitors, bounce rate, traffic source, etc.
Advertisement
Advertisement cookies are used to provide visitors with relevant ads and marketing campaigns. These cookies track visitors across websites and collect information to provide customized ads.
Others
Other uncategorized cookies are those that are being analyzed and have not been classified into a category as yet.
SAVE & ACCEPT